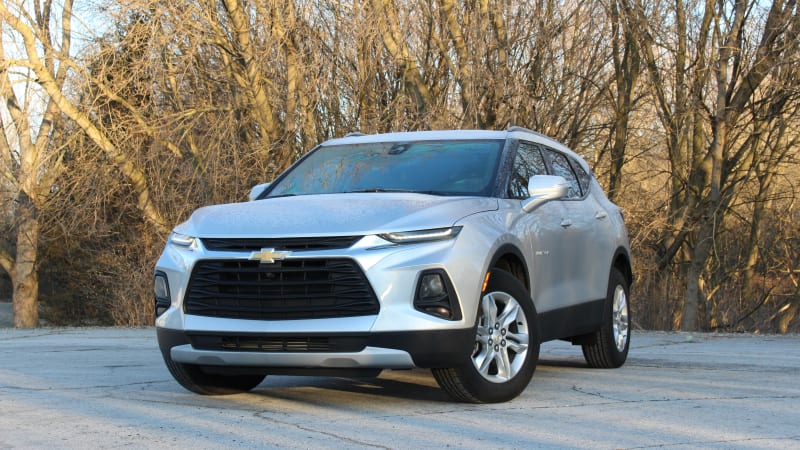 Our review of the entire 2021 Chevrolet Blazer line-up including its three available engines and multiple trim levels.

Once upon a time, the Chevy Blazer was a big, serious, truck-based answer to the Ford Bronco. It certainly isn't today. While the Bronco has been reborn and sticks to its original off-roading roots, the 2021 Chevrolet Blazer follows a completely different path. It's a car-based crossover for one, and rather than putting on pseudo-rugged airs, it taps into the performance branch of the Chevy family tree. Specifically, its styling and driving experience were inspired by the Camaro.

In many ways, it's a successful approach. It's distinctively attractive for the midsize crossover segment, which is generally bereft of driving pleasure and eye-catching styling. It's also a bit zestier to drive than the segment norm. Only a bit, however, and some will lament that it comes at the expense of ride quality -- especially with the available 21-inch wheels. Value is also an issue with the Blazer, even if prices went down for 2021. The upper trim levels don't provide enough of a performance or luxury enhancement to justify their sky-high price tags, while lower trims offer less space and equipment than cheaper compact models like the Toyota RAV4 and Mazda CX-5. So while it's OK that the Blazer isn't true to its roots, what it actually is could ultimately be better (or at least cheaper).

What's new for 2021?
Advanced safety tech is now more widely available for 2021, bringing the Blazer more in line with competitors. The Safety Assist package, which includes forward collision warning, automatic emergency braking, lane-keeping assist, a following distance alert and automatic highbeams, is not only available on the 2LT and 3LT trim levels, but standard as well. It's also standard on the RS and Premier. Adaptive cruise control, however, remains exclusive to those top trims and is grouped with a variety of other items in the Driver Confidence II package.

There are myriad other packaging and feature availability changes, plus the leather-wrapped steering wheel is no longer standard on the L, 1LT or 2LT. That's definitely a slide backward. So too is the Blazer's more advanced all-wheel-drive system no longer being offered on the top-of-the-line Premier.

Surprisingly, prices actually went down for 2021 by about $1,100 for each trim level.

What's the Blazer's interior and in-car technology like?
On the one hand, the Blazer interior impresses with its Camaro-inspired design elements — note the rotary air vents/climate controls in particular — that make it look as special inside as it does on the outside. Unfortunately, the quality of materials used is disappointing given the Blazer's price point. That's especially the case with the Premier and RS trims that can top $50,000, but even lower trim levels are no nicer than compact SUVs (Mazda CX-5, Toyota RAV4) that cost much less when similarly equipped. Quite simply, the Blazer either needs a lower price or a ritzier interior.

At least the Blazer's infotainment offerings are better and more abundant than most. Every version gets an 8-inch touchscreen, Apple CarPlay, Android Auto, 4G LTE in-car WiFi, OnStar and four USB ports, including a USB-C port (the small one). That standard touchscreen is pretty easy to use with big, clear icons and a sensible menu structure.

How big is the Blazer?
The Blazer is a midsize crossover, with exterior dimensions that put it in the camp of such vehicles as the Ford Edge, Jeep Grand Cherokee and new Toyota Venza (the Honda Passport also attends that camp but is far more spacious than the Blazer). However, rear seat legroom at 39.6 inches is only similar to larger compact SUVs like the Honda CR-V and Toyota RAV4, and it has less headroom. That sleek, low roof may result in your hair grazing the headliner, and with the panoramic sunroof, you might even need to slouch or utilize the seatback's ample recline.

The back seat does slide generously, making it easy to bring kids closer to those in front or free up extra cargo space. That's a good thing, since its on-paper cargo figures are unremarkable. There's 30.3 cubic feet with the seats raised and 64.2 when they are lowered completely flat thanks to a cleverly engineered seat bottom (see cargo video below). By contrast, the biggest compact models like the CR-V and Forester are in the mid 30s and 70s, respectively. Even Chevy's own Equinox has only a single cubic foot less of maximum cargo capacity than the Blazer.

What's the Blazer's performance and fuel economy?
The Chevy Blazer L and LT trim levels come standard with a 2.5-liter inline-four good for 193 horsepower and 188 pound-feet of torque. That's not a lot of grunt for a vehicle that weighs 3,810 pounds, and is grossly less than the base engines of most similarly sized midsize competitors. Like every Blazer engine, it's paired to a nine-speed automatic, but it only comes with front-wheel drive. Fuel economy numbers for 2021 were not available at the time of this writing, but we expect them to be the same as those last year. With the base engine, they were 21 mpg city, 27 mpg highway and 23 mpg combined, which is just OK given its meager output.

The 2LT and 3LT come standard with a 2.0-liter turbocharged inline-four that produces 230 hp and 258 lb-ft of torque. Front-wheel drive is standard, but all-wheel drive is optional. Fuel economy is actually better than the base engine, as it returns an estimated 21 mpg city, 28 mpg highway and 24 mpg combined with FWD. It lowers to 21/27/23 with AWD.

Optional on the 2LT and 3LT, and standard on the RS and Premier, is a 3.6-liter V6 that pumps out 308 hp and 270 lb-ft of torque. It's one of the quickest midsize crossovers as a result, hitting 60 mph in in the low 6-second range. Fuel economy is effectively the same whether you get FWD (19/26/21) or AWD (18/25/21). Note that the RS alone is available with a more advanced all-wheel-drive system with a torque-vectoring rear differential that improves handling in addition to further enhancing traction.

What's the Blazer like to drive?
Just as the Blazer features Camaro-inspired looks, its driving experience is definitely in the same spirit as Chevy's beloved muscle car. Even a basic four-cylinder Blazer riding on 18-inch wheels will whip around a cloverleaf with poise and minimal roll. The sportiest RS trim stays even flatter thanks to a sport-tuned suspension and the torque-vectoring AWD system.

Unfortunately, power steering disappoints — at least for those expecting the Blazer to be the sporting SUV its styling implies. It just doesn't engage enough or provide sufficient feedback. Ride quality is also a mixed bag. Even the Blazer on 18s has a firmer ride than we've come to expect from GM's crossovers, but damping is quite good, and it's perfectly acceptable for a vehicle with sporting intentions. On the other hand, the optional 21-inch wheels yielded a tiresome ride when driving between 25 and 50 mph on anything but perfect pavement. We couldn't see the bumps, but we could sure feel them. It was admittedly more livable at highway speeds.

In terms of engine choice, the base four-cylinder is obviously weak for a segment dominated by V6 engines. That said, we actually found it to be perfectly serviceable and not as doggedly slow in practice as we were expecting. It's pretty much in keeping with the four cylinders found in compact SUVs (of course, the Blazer's price is not).

The turbo-four provides lots of low-end torque and a peppier dynamic that you usually get in a mainstream grocery getter, but the upgrade V6 provides strong performance that compares favorably to other V6-powered competitors. For the sport-tuned RS model, however, it just doesn't provide the sort of soundtrack or amped up exhaust note that's expected. The transmission is also lazy to react and doesn't have paddle shifters to override those reactions. These may seem like nitpicks, but the Blazer RS is meant to be a sporty, performance-oriented SUV. Yet, for the same money, the Ford Edge ST goes a lot further toward that goal while boasting a whopping 30 more horsepower and 111 more pound-feet of torque
1 - 1 of 1 Posts