Joined Jun 4, 2019
·
123 Posts
If you're looking for something interesting to read about the Blazer, Autoblog did a deep dive on the Blazer's suspension. 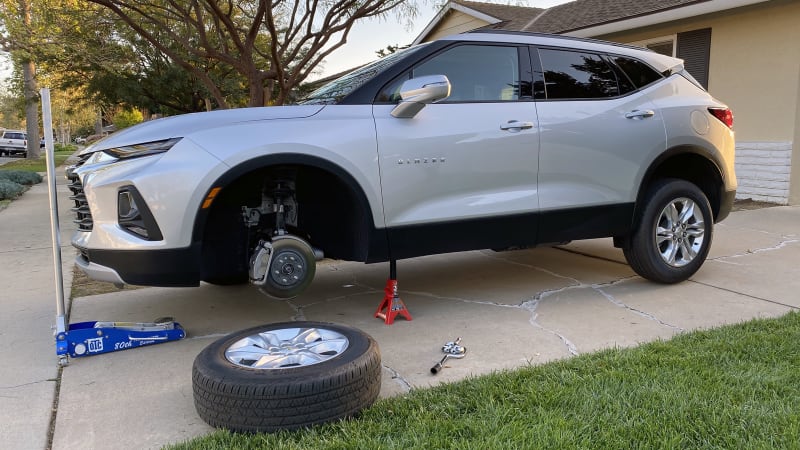 It's well-known by this point the latest Chevy Blazer is a crossover, but we crawl underneath to see what GM's engineers pulled together.

The original 1969 Chevrolet K5 Blazer had a mission: take sales away from the already-established Ford Bronco. The Blazer’s claim to fame was that it was a shortened full-size pickup with a removable roof, a concept that made it cheaper to produce, more spacious and better-equipped. The Bronco it was up against was the iconic original, a more compact utilitarian machine that was built to take on the Jeep CJ-5.

After a few years the Blazer concept took off, and in 1972 it began to consistently outsell the Bronco by about two to one. Ford responded in 1978 with a Bronco that essentially copied the concept: a shortened F-150-based utility with a similar type of removable roof. The two slugged it out as cross-town rivals until both were discontinued in 1996 (the K5 Blazer was officially known as the two-door Tahoe its last two years)

We’re only a few months away from having both nameplates back on the road, but their resurrected successors have taken strikingly different paths. Nothing is official yet, but it seems the Bronco is trying to occupy a space between the Toyota 4Runner and the Jeep Wrangler Unlimited. Indications are that it’s a body-on frame vehicle with link-coil rear suspension and independent front suspension like the 4Runner, but with a removable roof (and maybe even removable doors) like the Wrangler.

As for the Blazer, it has been back on the road for a year. It’s now a front-drive-based midsize crossover that’s trying to appeal to a wide audience by emphasizing comfort, convenience and style. Even if the two are no longer fighting for the same buyers, the impending reveal of the new Bronco has us thinking about its old nemesis. Seems as a good time as any, then, to eyeball the suspension hardware that underpins the latest 2020 Chevy Blazer.

Even from here it is plain to see that the Blazer’s front end rides on struts (yellow arrow), which is exactly what we’d expect to see underneath a crossover with a transverse-mounted engine. Two-wheel-drive Blazers are front-wheel-drive machines, and all-wheel drive is an option.

The strut assembly bolts to a cast-aluminum steering knuckle (yellow), which in turn connects to an L-shaped lower control arm (green) that is a weldment built from two steel stampings.

Because this L-shaped arm points to the back, its forward bushing handles the bulk of the cornering loads because it is in line with the lower ball joint (yellow). The rearward offset of the rear bushing, not to mention its shape and size, indicates that it is built to take the edge off of the rearward component of road impacts (green), with the forward bushing acting as a pivot. As for the vertical component, it goes straight up into the spring and damper that comprise the strut assembly.

The forward bushing is small and firm so the cornering feels steady, and it bolts to the chassis with a dog bone. The gap to the flange at its rear edge (yellow) shows that it can pulse back a little in response to a pothole strike, but it mainly acts as a pivot in such cases so the huge rear bushing can absorb a much larger portion.

The extruded-aluminum housing of the high-volume rear bushing is solidly bolted to the front subframe. The arm itself terminates in a solid steel shaft (yellow) that has been slipped into the bushing. There’s no bolt holding it in there, so I can only imagine that it is a press fit. A slip fit is very unlikely because that might allow motion between the two, and that could lead to squeaks.

The hulking mass of the engine and transmission (yellow) is visible in front of the drive axle, and that’s why this Blazer is a “rear steer” machine. That term doesn’t mean rear-wheel steering in this context, it means the steering rack (green) is mounted behind the drive axle and, more to the point, the steering axis.

We could see the entire stabilizer bar if not for that one piece of inner fender trim. But there’s enough here to get the idea. The final bend as we lose sight of it (yellow) is headed to a pivot bushing that’s behind the steering rack. But the important bit is the stabilizer link (green), which connects directly to the strut housing. This direct-acting linkage gives the bar a 1-to-1 motion ratio with regard to upward wheel movement.

The Blazer’s front brakes feature twin-piston (yellow) sliding calipers. But I’m not quite sure why they decided to encase the brake hose in the same sort of plastic cord minder stuff (green) I have under my desk. Looks? Abrasion protection?

It’s no surprise that the rotors (yellow) are ventilated, but I do appreciate the extra-long studs with a threadless area (green) at the end. This makes it easier (for me) to get the wheels up onto the studs without resting them on the threads. You need longer lug bolts to go with them, so this approach does include a weight penalty seeing as how there are 24 of these on the vehicle.

The rear suspension is quite tidy and compact, if only because the rotor manages to block the details. It’s certainly not a strut, and the upper connections do not appear to constitute a wishbone. It must be a multilink, but we’ll have to get in closer to see what kind.
J


Oh my. There’s a lot going on here, but neither the top nor the bottom is located by an A-shaped wishbone of any description. This is a five-link multilink, but I can’t say it’s a typical sort because of the way those upper links overlap.

The angled semi-trailing upper link (yellow) crosses under the upper lateral link (green) in a bid to maintain its ability to brace the wheel in the fore-aft direction despite not having enough packaging space to move the front attachment point very far forward. Rear-seat interior space and cargo room were clearly priorities here — as they should be.

The same thing is going on down where the lower links connect, but to a lesser degree. The semi-trailing link (yellow) mounts below and behind the lateral one (green) so it can be sufficiently angled to brace the fore-aft position of the lower end of the hub.

Those upper and lower pairs of links do everything except keep the wheel pointed straight ahead. That is the job of the fifth and final link, the toe link (yellow). It’s hard to see it clearly from this view, but the inner pivot bolt includes an eccentric cam (green) for making static toe adjustments.

The lower lateral link is the largest and most substantial of them all because it shoulders the spring and damper loads. The spring (yellow) is mounted almost exactly halfway out at what looks like a 0.5-to-1 motion ratio, which indicates that it’ll compress half an inch for every inch of wheel travel. The damper (red) is mounted much closer to the point at which the lateral link connects to the hub, and it looks to me that it’s a bit more than 0.75-to-1. But there’s no sign of the stabilizer bar attachment. We’ll have to look elsewhere.

The stabilizer bar (yellow) and its link represent yet another strand that make up the criss-crossed spaghetti that is the Blazer’s rear suspension, and it noodles its way to a direct linkage (green) to the aluminum rear knuckle and a 1-to-1 motion ratio.

This view also shows the prominent dip in the upper lateral link (red) that allows it to clear the body despite a fairly high pivot point.

This Blazer has the more basic of the two all-wheel-drive systems that are offered, not the more advanced “twin clutch” all-wheel-drive system that is standard on Premiere and RS. Be that as it may, it does seem to hang in space. Two of its mounts attach to the rear subframe’s main lateral beam (green — there’s another on the other side we can’t see), but whatever’s going on at the front is a complete mystery.

This rear-drive assembly has a long torque tube (yellow) that extends nearly a yard forward to its lone forward attachment point (green). The idea here is to neatly restrain wind-up loads that may result as the system meters power to the rear wheels. It’s a lo-cal version of what Mazda’s powerplant frame does for the Miata, but the MX-5 takes the concept much farther by binding the entire driveline together to deliver a host of other benefits.

The rear brakes consist of single-piston sliding calipers and generously ventilated (yellow) rear rotors. Each caliper contains an electronic actuator that rides piggyback (green) for the express use of the electric parking brake.

My usual picture of a tire on my scale was terribly out of focus, but the reading of 58 pounds was readable enough that I’m confident in passing that number along. That’s a reasonably light number that’s made possible by this Blazer LT’s use of modestly sized 235/65R18 tires and 18 x 8-inch wheels. I’m not sure I could say the same for the optional 20-inch wheels (standard on RS and Premier) or the redonkulous 21-inch rolling stock that’s optional on the RS and Premiere.

It is abundantly clear that the latest incarnation of the Chevrolet Blazer has gone fully mainstream in an attempt to appeal to a wide audience. It’s a two-row midsize SUV whose suspension clearly sacrifices off-road prowess in the name of daily-drive comfort. The new Ford Bronco, on the other hand, is not following the same playbook at all. It’ll take a few years to see which one of these onetime rivals has gone in the more profitable direction for their respective companies. We'll just have to wait and see.

Joined Jun 16, 2020
·
22 Posts
Interesting! I absolutely love the ride on my Blazer, I appreciate how smooth it is, and how it sticks so well in the torrential rain storms we've been having. I could care less about an off road vehicle; that's what Jeeps and side by sides are for.
1 - 3 of 3 Posts